Twenty-three-year-old Walter MacGregor (aka Wallie) craves adventure, her desires whetted by Sherlock Holmes tales. Her prayers are answered when her father’s rum-running brother Rory lands on the MacGregors’ doorstep, fleeing from enraged bootleggers. In quiet Gunmetal, Texas, during Prohibition, Rory’s tales of adventure charm Wallie, but appall her father, a respected judge.

When a freak accident horrifies the small town, Wallie believes she sees a crime scene that shows evidence of foul play. In short, it’s murder. Annoyed that no one agrees with her—including the sheriff and her dad—she sets out to prove her theory. Soon she is knee-deep in flappers and floozies, Chicago thugs sent south by Al Capone, and a crime lord in the sinful port city of Galveston. Her prim aunt wants her to pay more attention to her eligible suitors. Can Wallie stay alive long enough to figure out which one is her true love? 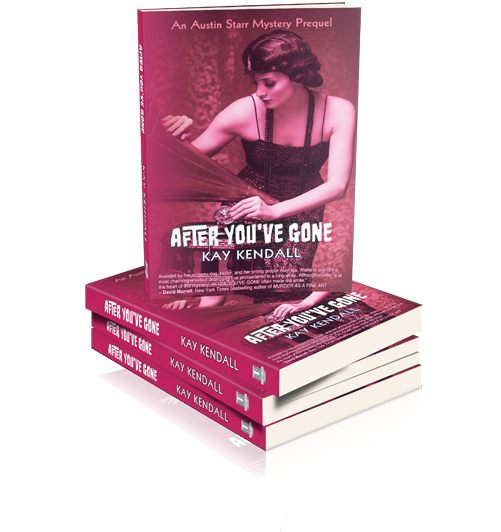 Kay Kendall writes the Austin Starr mystery series. The first two books capture the spirit and turbulence of the 1960s. Desolation Row (2013) and Rainy Day Women (2015) show Austin as a young Texas bride, forced to the frontlines of societal change by her draft-resisting husband. Austin copes by turning amateur sleuth. The latter mystery won two Silver Falchion Awards in 2016 at Killer Nashville. You might see a clue that suggests she more than adores the music of Bob Dylan.

After You've Gone (February 2019) is a prequel featuring Austin Starr’s grandmother who comes of age during the Roaring Twenties and Prohibition. This amateur sleuth searches for the killer of her uncle—who just happens to be a famous rumrunner in Texas. Kay’s work in progress, Tangled Up In Blue (Dylan again!), brings Austin and her grandmother together in 1970 to solve a family member’s murder in Vienna that involves Russian spies. In all of her fiction, Kay shows how patterns of human nature repeat down the decades, no matter what historical age one reads about. 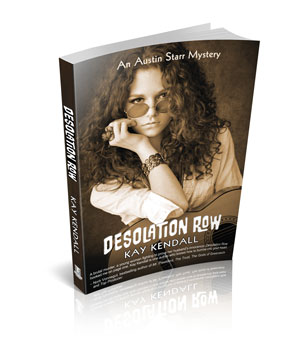 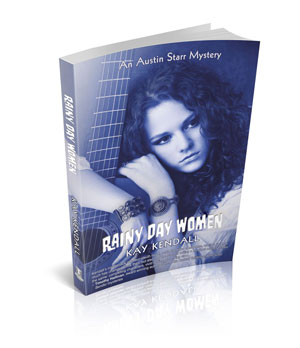 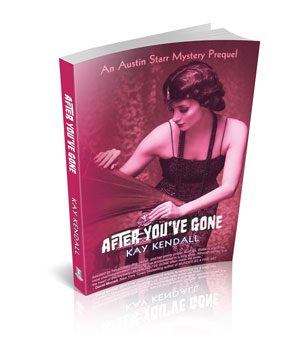 Murder By The Book

What people are saying about After You've Gone 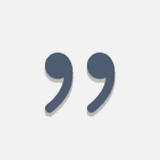 “ This story resonates with spirit, blending myth with reality, tragedy with triumph. Kay has a talent for place and character, smudging the line between right and wrong with a beguiling sophistication. The whole thing crackles with tension and imagination. ”

“ A quiet Texas town in the 1920s. Hard to imagine anything could go wrong. But when a fatal accident starts to look like murder, young heroine Wallie MacGregor sets out to uncover long-buried secrets. Assisted by her scrappy dog, Holler, and her primly proper Aunt Ida, Wallie is one of the most charming amateur detectives I’ve encountered in a long while. Although murder is at the heart of this mystery, After You’ve Gone often made me smile. ”

“ A delightful romp that combines a thriller, a romance, and a young girl's journey from ingénue to courageous woman. Austin Starr fans will love seeing where she got her intrepid spirit. ”

Macavity Award-winning author of A Risky Undertaking for Loretta Singletary

“ Roaring through 1923 Texas in search of secrets from her uncle’s shady past, Miss Walter “Wallie” MacGregor braves gangsters, flappers, and her overbearing Aunt Ida. In this prequel to the Austin Starr mysteries…readers will see where her granddaughter, Austin Starr, gets her curiosity and spunk. And the unexpected conclusion is highly satisfying. As Wallie might say, “It’s the cat’s pajamas.” ”

Anthony and Macavity Award-winning author of the Ellie Stone Mysteries

“ Kay Kendall’s Austin Starr mysteries are great reads, and After You’ve Gone follows right in the family footsteps. Readers will love the story, and Kay is a master of drama and historical accuracy. ”

“ Sweeps us from the sudden reappearance of a prodigal scoundrel to family secrets, bootleggers, murder, and a young woman’s yearning for adventure and independence Whether exploring one family’s past or showing life in 1920s Texas, clearly to Kay Kendall, history matters. ”

author of The Lost Concerto and Dark Rhapsody

“ Southern manners meet their match with irrepressible Wallie MacGregor, a charming belle who dreams of road trips, flapper hairstyles, and using her brain like her hero, Sherlock Holmes. She gets her chance when a long-lost uncle’s reappearance leads to tragic consequences. ”

award-winning author of Path Into Darkness

“ This charming historical adventure features a protagonist readers will warm to. Bootlegging, newfangled motor cars, prodigal family members with shady backgrounds...all create an enjoyable set of temptations and tribulations for our heroine, who always tries to remain ladylike however challenging the circumstances. ”

Before Kay Kendall began to write books, she was an award-winning international public relations executive, working in the US, Canada, the Soviet Union, and Europe. Ask her about working in Moscow during the Cold War—and turning down a job with the CIA in order to attend grad school at Harvard. Because of her degrees in Russian history, Kay often brings Cold War elements into her tales. She takes great pains in her books to get historical settings and details right—no anachronisms allowed.

Kay is president of the Southwest Chapter of the Mystery Writers of America and is a member of the national board of MWA. She and her Canadian husband live in Houston, Texas, and have rescued abandoned pet rabbits for 20 years. They have a tolerant spaniel who co-habits with the three bunnies that currently reside with them. Over the years they have rescued 14 rabbits. 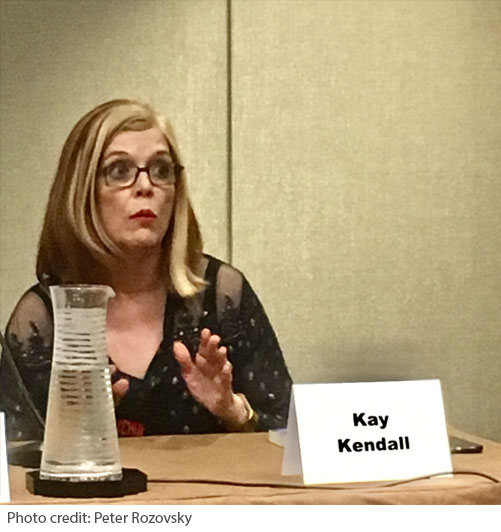